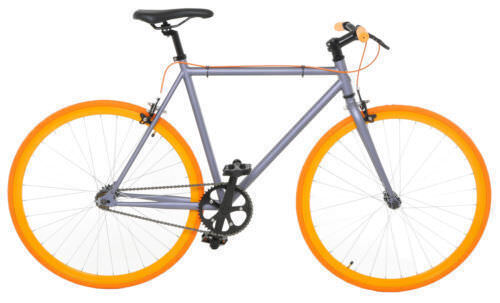 Being physically active is an important means of staying fit and healthy. For many people that bike, riding a track bike is an effective way to burn calories and maintain a healthy lifestyle. These types of bikes are generally used for racing at an indoor or outdoor track.

Do velodrome bikes have brakes?

A track bike is designed for a velodrome, an arena for track riding, and does not have brakes. Instead, it has a single, fixed rear gear that prevents freewheeling. This helps reduce weight, avoid sudden braking, and maximize speed while still allowing the rider to go slowly by pushing back against the pedals.

What is special about a fixed-gear track bike?

A fixed-gear bike, also called a fixie, features a drive-train that has no freewheel mechanism. Though freewheel was developed early in bicycle history, this bike remained the standard design for track racing. More recent bikes have become a favorite among urban cyclists since they offer the advantage of simplicity unlike the standard multi-geared bike. As a result, established bike manufacturers are producing fixed-gear road bikes in greater numbers. These bikes are also characterized by relaxed road geometry rather than steep track bike geometry.

With a drive sprocket bolted or threaded directly to the back-wheel hub, a fixed-gear bike has the pedals directly coupled to the wheel. This enables a cyclist to apply a braking force with the bodyweight and legs by resisting crank rotation. It also makes backwards cycling possible. A track bicycle is a type of fixed-gear bike optimized for racing at a track. Some club and road racing cyclists use this track bike to train during winter months with a relatively low gear ratio that helps in developing a good pedaling style.

What are the features of a track bike?

A track bicycle offers agility, speed, and efficiency. As stated earlier, it is a fixed-gear bicycle with inflated narrow tires to reduce rolling resistance. Track bikes are engineered differently to make them more aerodynamic and more efficient at hard sprinting. The fork blades are circular, rather than oval-shaped. They feature more upright angles in the frames to increase maneuverability while maintaining stiffness.

A track bicycle is uniquely designed to suit its racing purpose. Assembled from tubular elements before sale, its frames are made of titanium alloy, aluminum, carbon fiber, or a blend of these materials. The lower gear ratio allows for fast acceleration while limiting top speed. Some of the other distinctive features of track bikes on eBay include: