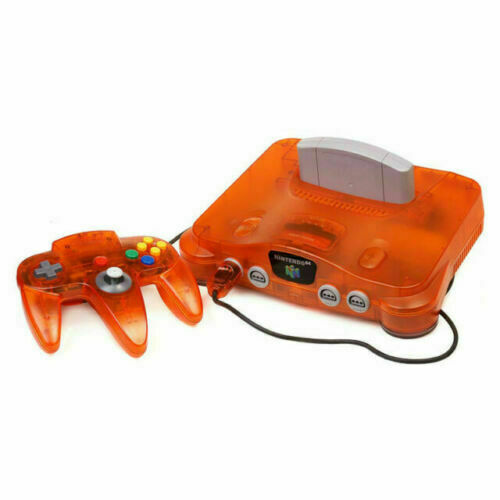 The first Nintendo 64 consoles were sold in Germany in 1997 and captivated gamers directly with impressive graphics. Thanks to 64-bit technology, Adventures in 3D worlds just set new standards, securing numerous trailers for the gaming console - and this continues today.

That is also down to the innovative controls that revolutionized the Japanese for Nintendo 64 consoles once again. The analog stick allows for precise control that feels even more realistic with the Rumble Pak. The controller responds to events in the games and vibrates-allowing you to relive PC games & video games from scratch.

What games for Nintendo 64 consoles should I play?

Absolute highlights of the Japanese companys hardware typically include the titles of their own developers. This is also true of the Nintendo 64 consoles, which caused quite a stir even when released with the classic Super Mario 64. In addition, jump n runs featuring Donkey Kong and The Legend of Zelda adventure series are among the bestsellers. However, even as an action and racing game fan, you will be very well entertained with Nintendo 64 consoles. With multiple players in mind, Mario Kart, Mario Party, and many other titles in particular guarantee fun for big and small.

What accessories do you need for Nintendo 64 consoles?

In order for you to enjoy your Nintendo 64 consoles a lot, multiple controllers are important at first. These video game accessories are available in numerous colours and finishes, making it easy to pick your favourites. Very convenient: Nintendo 64 consoles come with four slots, so you can get started together right after you plug it in. Last but not least, look out for an expansion pak. This expansion is needed for some graphically particularly elaborate games and provides enhanced visuals for more titles. Get to know the great range and opt for the highest level of gaming fun.