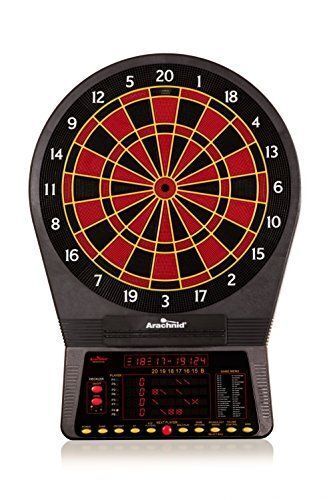 The game of electronic darts is a spinoff on the sports game of professional darts, and it is an activity that is often played at bars, pubs, and in your own house. Electronic dart boards were invented in the 1970s, and the game has continued to be played. Arachnid was one of the first companies to produce electronic products, and they manufacture a number of them that include various functionalities, have multiple game options, have different layouts, and much more.

How is the game of electronic darts played?

This game is played much similar to the original game of darts as the board is placed the same height off the floor and has the same layout, with wedges numbered from one to 20, a bullseye, and a double bullseye. The darts used incorporate a plastic tip that is able to fit and stick into hundreds of tiny holes when it is thrown.

What sizes do Arachnid dart boards come in?

Arachnid products come in two main sizes: 15.5 inches and 13.5 inches. The 15.5-inch target is the same as is used in tournament play and in regulation games. On the other hand, the 13.5-inch target is slightly smaller, making it a better option for in-home use or for smaller areas.

What gameplay options are offered by Arachnid?

Arachnid products can include up to 40 different gameplay options with more than 200 variations, some of which are as follows:

Content provided for informational purposes only. eBay is not affiliated with or endorsed by Arachnid.